This spring and summer I have been jokingly calling our farm “the Body Farm.” I am referring to the University of Tennessee Anthropological Research Facility called “The Body Farm.”  It is a research facility for studying human decomposition.

Every year brings it’s share of dead bodies at Small Wonder Farm, but we are way over our quota for the year.  We have had dead baby birds, adult birds, snakes, chipmunks, squirrels, moles, a young raccoon and a few chickens.  Yes, sometimes it can be quite gross–especially depending on the state of decomposition, but you get used to it.  One of the gifts of the farm is the lesson of death and decomposition.

This picture of Frida, from today, shows the latest corpse.  Most of the deaths are from natural causes.  Most of the moles, however, (like the one pictured below) are dug for and captured by the dogs who then play with them until they expire and then leave them all around the yard.  Frida, in particular, considers a corpse a real treasure.  Earlier this summer she made it in the door with one.  Luckily I saw her scoot past me with it.  This one she laid at my feet on the porch.  Her contribution to the family stew-pot for the day?  I doubt it.  She does not want to share.  She wants to gloat.  When it became clear to her that we were going to strip her of her prize, she turned her back to Paco and made it quite clear she was not going to give in easily.  Poor kid.  Sometimes co-habitating with humans really stinks. 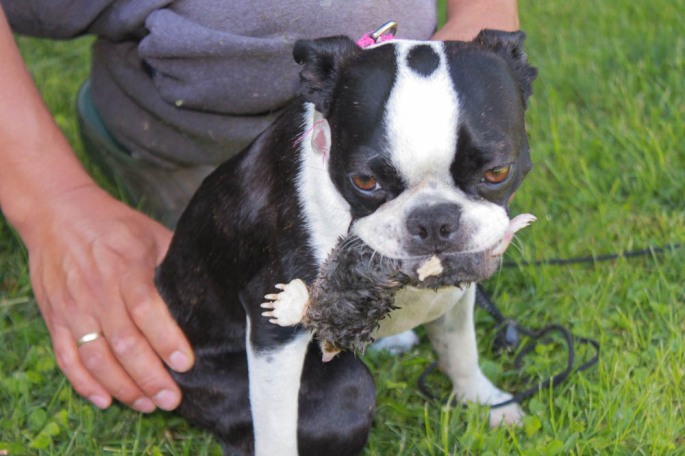