It’s fall for sure here at Small Wonder Farm.  I used the steam juicer yesterday to make grape juice.  For the first time ever, the grapes came from our farm.  Very exciting!  I have blogged about this other years if you are interested in the process.  I also made grape syrup with them.  This was a new one for me.  The recipe, a simple one required grapes, sugar (I used agave), and a bit of water.  After boiling the 3 together, I ran the cooled product through my food mill and got a yummy syrup.  We will use it like maple syrup and also add it to carbonated water to make grape sodas.  Yum!

Other signs of fall are everywhere–including the kitchen where I have 1.5 bushels of apples staring at me waiting to be sauced.  The tomatoes are only coming at a trickle now, but the cucumbers, peppers, and zucchino rampicante are still producing heavily. I harvested a few ears of each of the flint corns to get a good look at them.  Beautiful does not do it justice.  Most people know, I am a huge fan of color and the Red Floriani Flint Corn and the Oaxacan Green Dent corn are exquisite. In addition, potatoes, onions, and garlic are getting cleaned and bagged for long term storage.

Got lots more seeds in the ground today and the things planted a week and a half ago are coming up nicely.  Today I planted chard, lettuce, more spinach, more scallions, and more carrots. I am excited about the new garden season and so happy to leave the worst of the heat behind.  Today I needed long sleeves to have my coffee and granola on the porch.

Now that it is May, I think an update on the high tunnel is in order. I could not be happier with it and am so glad we have it. We enjoyed fresh veggies from the tunnel all winter. Nothing grows in January and most of February due to lack of light, but we were still able to pick spinach and carrots. It’s amazing to me that the kale and spinach I seeded last August have fed us from September to now and are still going strong. The only crops that were sown in fall and did not winter over was the lettuce and broccoli. Here are some of the crops that have done particularly well:

Spinach–sown in August and picked through the winter, still going strong

Arugula–I planted a fall bed, ripped it out in March because it got woody and seeded another patch

Swiss Chard–fall crop did great, died back almost completely in the harshest winter weather and then some came back–interestingly enough the plants that came back were the white veined ones

Claytonia–sown 12/31 and harvesting heavily for the past month, still going strong

Strawberries–transferred “the volunteers” from the main garden in September and we started harvesting this week! The bed outside is just starting to flower.

Cilantro–I’m have blogged about this previously. Cilantro overwintered and we were able to harvest in the fall and then again in late March. Now, I am starting to rip it out as int gets overgrown and am planting new plants outdoors.

Carrots–perhaps one of the best crops. I seeded them in August and more in late September. The August planting was perfectly timed. The carrots were sweet and beautiful. I was able to harvest through the winter and the ones we seeded on 12/31 are growing beautifully. The ones seeded on New Year’s Day are getting close to harvest.

Onions–we have been harvesting bunching onions through late fall and still are. The “Bridger” onions from Johnny’s Seeds sown last fall are already knob sized and will give us a nice crop of early storage onions.

Potatoes–I planted some fingerlings in very early March and they are big and beautiful. They look like outdoor plants do in late June. Flowers will be here shortly. Interested to see how quickly we can start harvesting. Between these and the beds of storage potatoes outside, we should have a nice staggered crop. Stay away potato beetles.

And more–we also have had numerous radish harvests, have beautiful cabbages and broccoli coming along, and are picking dandelion greens, raddhicio, and chicory as well.

Lettuces–stunning and almost no bugs. Sure seems to me that one of the greatest advantages to high tunnel growing is the early start you get when the insect pressure is very low or even non-existent.

The only true fail we have had is our plastic has been badly ripped on one side.  We did not do enough to secure the plastic that meets the ground on each long side. The crazy March winds tore it badly.  I took this kind of hard until I found out that one of my neighbors greenhouses had all the plastic torn off by straight line winds.  That was the night that the tornado hit about a 10 minute drive from here.  I now count us lucky that is all that happened.

This week we rolled both sides up and took the plastic of the ends.  We ran green fencing to keep the dogs out.  The summer crops started to go in about a month ago.  It is amazing.  Here are some photos I took yesterday: 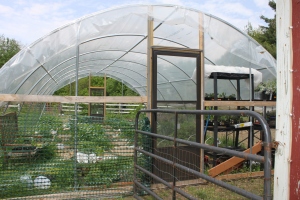 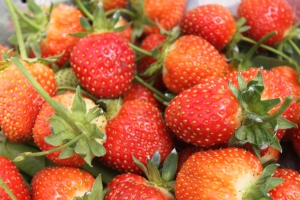 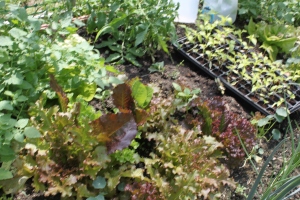 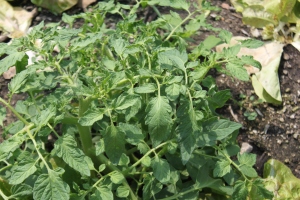